The Lodge Cast Iron Factory Store in South Pittsburgh, Tennessee, is a cook's dream come true. The welcoming staff greets visitors to the store that features all things cast iron.

Early on, the company leased a building from US Steel and had 100 employees. In 1910, the cupola of the building caught fire and the wooden building was destroyed. Not to be deterred, Joseph rebuilt the company three months later.

The 1950s and '60's brought updated technology at the foundry where it moved from hand-pouring to automation using a Danish (sand) molding machine. The foundry became the first American company use the Disamatic on US soil in 1965.

Through the Great Depression and hard economic hardships of the '70s, the foundry still stands as a testament to American resilience. Today, Lodge Cast Iron employs nearly 500 people.

How is cast iron cookware made? 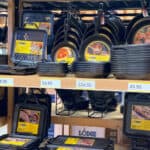 Lodge Cast Iron has a "recipe" for making their heirloom quality cast iron. Ingredients include pig iron, recycled steel, and alloys that get melted together at 2800°. It takes 45 minutes for the products to liquefy. During the process, impurities rise to the surface and are removed.

The foundry uses modern-day technology via a spectrometer to measure the chemistry of samples of the molten compound. Next up, silicone is added and then when it all looks good, it's time for casting.

Molds of sand are used for making cast iron. Interesting Fact: sand melts has a higher temperature than cast iron, so therefore it holds its shape when molten iron is poured into it.

Once the casting has been made, it is moved along to a vibrating conveyor belt to shake off the sand. Next, the cookware goes to a rotating drum and gets scrubbed with iron media to help remove sand.

After being sorted, the cookware gets finished by being cleaned with a shot blasting machine. Before moving on, any rough edges are ground down. Cast iron is then deep cleaned in a mixture of stainless steel media, water, and soap to enhance the finish.

Last, but not least, is the seasoning of cast iron cookware. The cookware is rinsed and then blown with hot air before being coated with vegetable oil and baked at a high temperature.

The Lodge Cast Iron Factory is located next to the foundry where its quality cast iron cookware is made in America. It opened in 1994 and initially was the place to purchase cast iron "seconds," items that did not meet quality standards.

Today, visitors to the store not only can purchase seconds at a discount, but also shop from the full line of Lodge Cast Iron including the luxurious Finex line.

In addition to the cookware, there are accessory items like wooden plates to hold fajita skillets.

There are also glass lids, cookbooks, honey jars, flour sifters, and so on. If you don't have room in your car to haul your new treasures, you can have them ship your purchases.

The factory store is located at 220 East 3rd Street in South Pittsburg, Tennessee. It's open from 8:00 am until 6:00 pm every day.

Check out this video from Constance at A Good Life Farm about our trip to the store and see what she purchased:

Have some cast iron that needs a little TLC? Don't throw it away! Check out this post about seasoning cast iron.

Welcome to Silver Sun Seeker. Life is too short to stay at home. Let's hit the road and discover some great destinations where the food is delicious and the sun is shining.We're Lynda and Jeff, two Generation Xers making our way across the South - and wherever else our car, boat, or a plane will take us - in search of beautiful sunrises, sunsets, and fabulous food.